Cardiovascular disease (CVD) had become a leading cause of death among people in developing countries including Thai military officers. No long term data on preventing CVD events in this group had been published before. Thus, our main study purposes were to identify the target individuals who carried the substantial risk of developing CVD event and prevent them in advance.

After approved by the ethics committee and medical organization of Chandrubeksa hospital in 2006, all in service officers (aged of 35-60 years) who undergone annual screening, were voluntarily enrolled. We excluded officers who were beyond this age range, not willing to participate or already had CVD. To predict the 10-yr risk of developing CVD events, we used the modified Coronary Risk Chart (mCRC) to classify asymptomatic Air Force officers into three groups; the low, intermediate and the high risk candidates, according to the predicted cardiovascular risk of < 9.9%, 10-19.9% and > 20% respectively. For all participants, life-style modifications was given, but medication and further screening with exercise stress test were provided only in the intermediate and high risk groups. All subjects were followed from 2006-2016 by an annual physical check-up. After ten years, the clinical outcomes (acute coronary syndrome, stroke, total death and composite events) were compared between the three groups.

By using the mCRC (available at www.thaiafheart.com), prediction and reduction of CVD events in asymptomatic officers were feasible. The observed ACS and stroke rate were > 50% lower than the predicted one and no statistically significance was found among the three risk groups. Progression to ACS or stroke was observed also in non-high risk cases. We therefore recommend re-assessing CV risk every 3-year and re-emphasizing the importance of CV preventive measures. While the ACS and stroke rates were lower than expected, we observed the high rate of non-CVD death which was significantly increased in the high-risk group. This group of individuals should be targeted for further preventive measures related e.g. smoking and alcohol consumption. 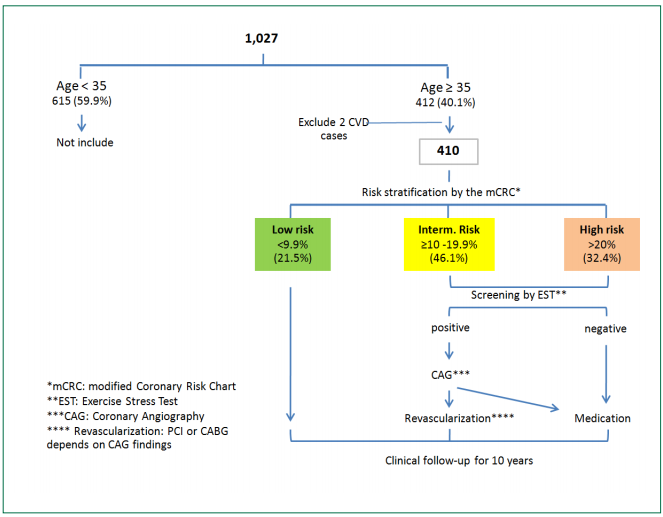 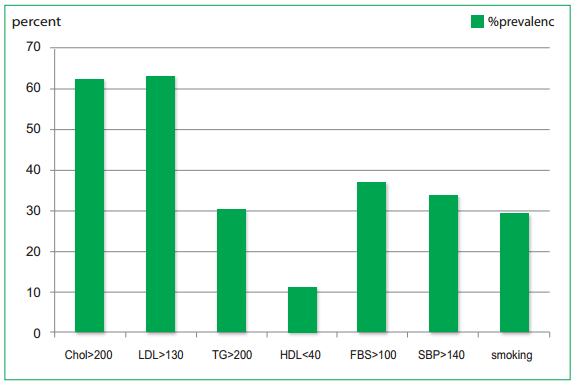 Major coronary risk factors in a total of 410 cases.
Figure 3 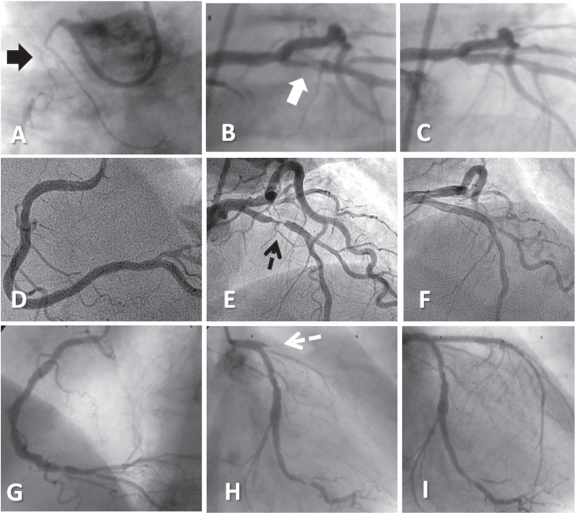 Sample coronary angiograms of three cases who had poor medical compliance and persistent high risk before ACS development: Upper-row (A-C); A 37 years old, high-risk man who he was excluded by age of 34 in 2006 and had STE-ACS three years later. Post thrombolysis angiogram showed an occluded RCA (A), a localized thrombus in the proximal LAD artery (white arrow, B) before and after stent implantation (C). Middle- row (D-F); A 51 years old, low-risk woman, who had risk progression contributing to STE-ACS over nine years. An unobstructed RCA (D), subtotal proximal LAD stenosis before (E) and after stent implantation (F) were shown. Lower-row (G-I); A 47 years old, high-risk man, who had an initial negative stress test and STE-ACS at age of 50. Distal lesion in the RCA (G) and a totally occlude proximal LAD artery before (dashed white arrow H) and after stent implantation (I) were illustrated.
Figure 4A-D

Sample coronary angiogram of three asymptomatic, intermediate risk members who had occult CAD which were detected by a positive exercise stress test. Case 1: A 53 years old, ex-smoker, diabetic and dyslipidemic man, had a totally occluded mid Cx artery (A, white arrow) and diffuse severe LAD stenosis (B, white dashed arrow). He received coronary bypass graft surgery and did well thereafter. Case 2: A 51 year old man, with history of diet control diabetes mellitus and low HDL, who had a severe stenosis of the proximal RCA (C, dashed arrow). He underwent stent implantation and had negative stress test in 2015. Case 3: A 58 year old, asymptomatic man, with history of diabetic mellitus, dyslipidemia, who had a subtotal stenosis of the mid RCA (D) required stent implantation.
Figure 5

Histogram compared the clinical endpoints of each group. None of them were statistically different, except the death and composite events between the low vs high risk groups.
Figure 6

From table 5, the prevalence (%) of positive exercise stress test (performed only in intermediate and high risk groups) and their combine 52 events (ACS+ stroke+ death) by each risk score were illustrated in a histogram 6A and 6B respectively.
LOAD MORE
SEARCH VOLUME & NUMBER
GO
RECENT VOLUME & NUMBER
MORE