Optimal coronary intervention for treating bifurcation lesions remains a challenging issue and this patient subset generally  had  lower  immediate  procedural  success  and poorer outcomes in comparison to those of non-bifurcation patients.1-6 With no final consensus for any specific strategy1-4, provisional side-branch intervention is preferred since there was no proven benefit of routine systematic two stent implantation (one in main and another stent in side branch).7-9 After stenting the main branch, one question must be answered: should the side branch be treated in addition to the main branch? In current practice, only angiographic assessment (visualizing ostial lesion in multiple orthogonal views) is used to decide whether or not the intervention of side branch lesion is required. In some cases, those clear views may not be possible so the limited angiographic view often leads to overestimate the severity of ostial branch lesions.10-12 To overcome the angiographic limitation, fractional flow reserve (FFR) has been used for functional assessment of questionable lesions as reported by Koo et al.12 but the outcome in Thais remains unknown.

This study was performed to evaluate the efficacy of side branch intervention guided by FFR compared to without FFR after main branch DES stenting as a provisional strategy. Efficacy will be determined by clinical outcomes (cardiac death, myocardial infarction (MI), target vessel revascularization (TVR) at the 6 months follow-up. The study was approved by the Institutional Review Board  for Human Subjects Research of Bangkok Metropolitan Administration Medical College and Vajira Hospital (BMA).

A total of 26 patients with de novo, coronary bifur- cation lesions after successful stent implantation at the main branch attending BMA Medical College and Vajira Hospital between June and December 2011 were included.

After written, informed consent was received from all of the participants, and patients were randomly assigned to either the FFR guided side branch intervention group (FFR group) or the conventional intervention (CI) group.

FFR group (FFR-guided side branch intervention group): Once the coronary drug eluting stenting of the main branch with standard technique was performed, the pressure wire was passed through the stent’s struts and FFR (Radi Analyzer TM Xpress, St. Jude medical, USA) was measured at 5 mm distal to the jailed side branch ostial stenosis, at maximal hyperemia (induced by adenosine intracoronary bolus of 60, 80, and 120 micrograms when the distal pressure reached a minimum. Lesions with FFR < 0.75 were considered to be a significant functional stenosis. After  the  kissing  balloon  was  administered  (a side-branch balloon dilatation was performed by using a small balloon sized smaller than the side-branch diameter),FFR was re-measured. Further stent implantation was only recommended when FFR remained < 0.75. FFR measurements were also repeated after stent implantation.

CI group: Patients assigned to the conventional group underwent stenting of all indicated lesions with the decision to treat side-branch lesion and the strategy of intervention depending on the surgeon operating.

Quantitative coronary angiography (Q angio XA 7.2 QCA, Medis Medical Imaging, Netherlands) was  performed  on both groups by a single experienced technician who was blinded to the FFR value. QCA was done twice before and after the procedure. The minimal luminal diameter, lesion length, and the reference diameter of both branches were measured.

All patients were seen 6 months after the  time of their initial enrollment in the study for follow-up. The  end points studied were 1) cardiac death 2) myocardial infarction 3) target vessel revascularization (TVR). Hospital records, out-patient clinical records and inter- views with the patients or primary physician were used for confirmation of the events.

Of the 26 patients, 8 were 2:1 randomly assigned to FFR guided PCI and 18 to the CI group. The baseline characteristics of both groups were similar (Table 1), the mean age was 25.49 years, and 50% of the patients were men. All the patients in both groups are hypertensive, 50% have diabetes but none have a family history of cardiovascular disease.There are more unstable angina patients in the FFR group  (5 (62.5%)  vs. 8 (44.4%),       p = 0.52). The mean LVEF are 57% and 59% in the FFR and conventional group respectively. Similarly, there was no significant difference in the baseline angiographic profiles and procedural characteristics between these two groups (Table 2). We found that there were no significant differences between the two groups in terms of lesion location, bifurcation type, and bifurcation angle. Among the FFR group 5 (62.5%) patients had balloon inflation at the side branch after initial FFR measurement but only 3 (37.5%) still have FFR < 0.75 so side-branch stenting was considered with provisional T-stent technique in all three patients. In the CI group, 14 patients had balloon inflation at the side branch but only 11 patents (61.11%) had side branch stenting with two (18.18%) in culotte technique,four (36.36%) in T-stent technique and five (45.46%) in crush technique. The percent of stenosis of jailed sidebranch lesions dropped from 65.67 ± 11.61 to 37.88 ± 19.73 and 61.83 ± 7.91 to 20.11 ± 21.82 in the FFR and conventional groups respectively.

A comparison of clinical outcomes showed one patient (5.50%) out of eighteen of the conventional group died from frank pulmonary edema and cardiogenic shock.None of the FFR group died during this period. Two (11.10%) in the CI group had target vascular revascularization from side branch in-stent restenosis. While two (25%) of the FFR group had myocardial infarction during the fourth and fifth month after the procedure. No patient had periprocedural MI. There was no significant difference (p = 0.08) in cardiovascular events between the two groups during the 6 months follow-up period (Table 3). 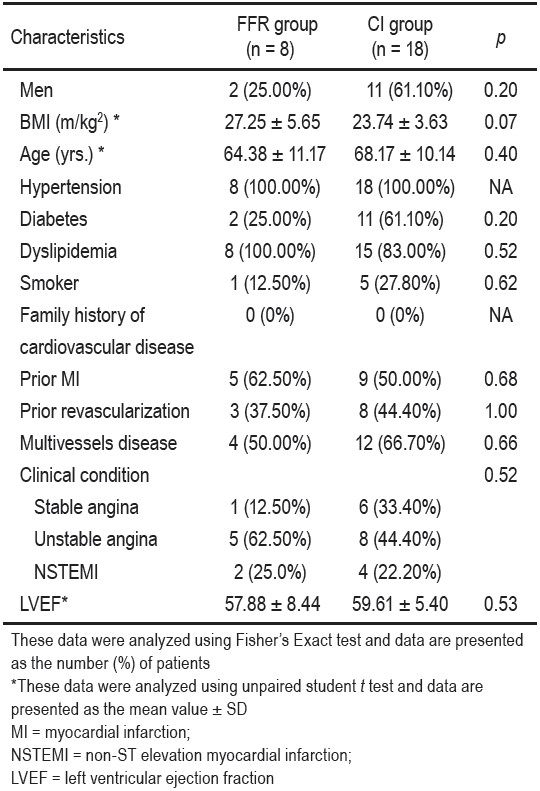 Table 2: Angiographic and procedural characteristics of the patients.

Table 3: Comparison of 6-month clinical outcomes between the FFR group and the CI group. 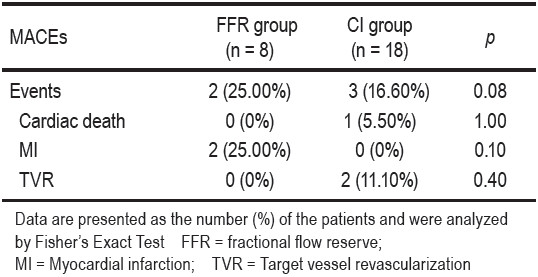 Previous studies show no benefit of the systematic two stenting strategy.7-9 Currently, there is no clear guideline on how to treat jailed side-branch. The study of Koo et al.12 also shows that angiographic evaluation potentially over- estimates the functional severity of jailed side-branch and increases unnecessary intervention and complications. There are several potential limitations of our study. First, the sample sizes are relatively small to draw conclusions. Second, the quantitative coronary angiogram system  used in our study does not have a dedicated bifurcation analysis system therefore the manual correction could have some technical errors. Third, the 6 month follow-up period is another limitation. Therefore, it is possible that a longer follow-up time and a larger sample size may end up with a different result. Despite these limitations, our study suggests that the physiologic assessment of jailed side branch by using FFR is feasible and reduces the incidence of unnecessary stenting.

FFR guided PCI in bifurcation lesions may reduce mortality and target vessel revascularization in this popu- lation. This strategy should be considered as a reasonable choice for treating jailed side branch.

There is no conflict of interest for our study.

We wish to thank Bangkok Metropolitan Administra- tion Medical College and Vajira Hospital Research Fund and Clinical Research Center for their support of this study. We  are also grateful to all patients, nursing staff  of the cardiovascular unit and the BMA laboratories’ technicians for their cooperation in this study and their dedication to the care of these patients.