Lung cancer remains the most common type of cancer and was the leading cause of cancer-related deaths in 2018. Globally, the recorded number of new cases of lung cancer and its mortality rate are increasing exponentially. Early detection and screening are being encouraged and implemented to lower the1 rate of lung cancer cases , taking into account that this type of cancer has a poor survival rate and unfavorable prognosis in advanced stages.2 Solitary lung nodule is isolated, round or of an irregular opacity, with a diameter of 0.8cm and surrounded clearly by aerated lung.3 Resection of the detected early stage tumor through surgery can lead to a greater likelihood of a promising prognosis. The challenging part comes in establishing precise localization of the solitary lung nodule during preoperative preparation. The process of preoperative localization includes introduction of a liquid marker, such as methylene blue dye, and placement of fiducial markers. Localization under Electromagnetic Navigation Bronchoscopy with methylene blue dye marker4 can be useful but pleural dye leakage is a major concern. It may lead to failure of localization if this happens. Fiducial markers, which are stationary objects usually made up of gold or platinum coil spring markers, provide a high contrast during fluoroscopy, and is another tool to help guide the surgeon during the operation.5

The objective of our study is to highlight the efficacy of fiducial marker placement as an effective aid and guide for surgeon during a resection.

Two cases of solitary lung nodule were detected via chest computed tomography (CT) that underwent successful fiducial marker placement with dye marking, to determine the nature of the pulmonary nodule.

This is a case of a 55-year-old male with no underlying medical conditions. Presented with an abnormal result from the chest radiograph, which was then verified by a follow-up CT chest. He has no familial history of cancer or tuberculosis. His PET CT (Figure 1) revealed a moderately increased FDG uptake in a 1.6x1.5x1.8 irregular nodule at right lung apex with nearby fibrosis and traction bronchiectasis (SUV max of 4.18), with high suspicion of malignancy. His spirometry result was normal. Tissue biopsy was advised. He elected to undergo surgical biopsy with possible lobectomy if malignancy was confirmed from frozen section.

To ensure a successful localization of the nodule, placement of the fiducial marker with dye (Figure 1A and 1B) along with the utilization of electromagnetic navigation bronchoscopy (ENB) and wedge resection of the right upper lobe through Video Assisted Thoracic Surgery (VATS) was advised. The patient was placed in a supine position under single lumen endotracheal tube No.8.5. A magnetic board and sensors were positioned on the patient. Routine preoperative planning and virtual bronchoscopy were performed. The nodule was

located in the posterior segment of right upper lobe. Flexible bronchoscopy with 2.8 mm working channel was used. Locatable guide was inserted through Extended Working Channel (EWC) then registration was completed. We started to navigate from the apical segment of right upper lobe bronchus and reached 0.6 cm away from center of target then the locatable guide was removed from the extended working channel (Figure 1B). The 25 G injection needle (InjectorForce Max 1650 mm, minimum channel size 2.0 mm) was then inserted through the extended working channel and advanced to the subpleural area under fluoroscopy, then 0.3 ml of methylene blue was injected, followed by gold fiducial marker in the same location (Figure 1A). Then the patient was placed on left lateral decubitus, prepped and draped. Thoracoscope was used to visualize in the thoracic area. Fiducial markers were identified along with methylene blue. (Figure 1C). Time of localization to thoracoscope exploration was 31 minutes. Wedge resection by EndoGIA was performed. Frozen section was positive for adenocarcinoma. The procedure was then followed by right upper lobectomy with systematic lymph node dissection. The patient performed well after the operation and was discharged on postoperative day 3. Pathology demonstrated stage IA2 adenocarcinoma. 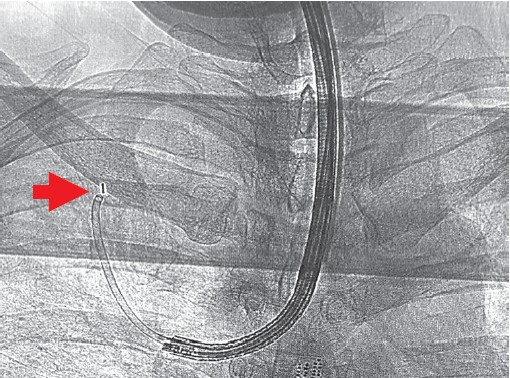 Figure 1A: An image showing the placement of the fiducial marker in the right upper lobe. Figure 1B: An image showing the locatable guide reach 0.6 cm away from center of the lesion. The localization technique was employed similar to the first case (Figure 2A). Fiducial was identified, however, methylene blue spilled out of the pulmonary parenchyma and thoracic cavity (Figure 2B). Wedge resection was done. Frozen section revealed granuloma therefore operation was concluded. Cryptococcus was seen on her pathological report, and the patient was prescribed with fluconazole 200mg 1 capsule twice daily for 3 months. 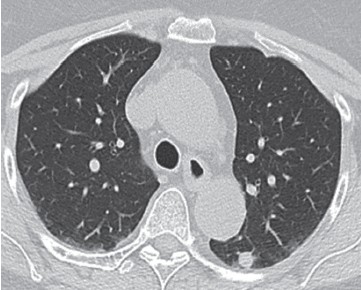 Figure 2: The initial CT chest demon- strated the presence of a nodule as shown by image above.

Figure 2A: An image showing the placement of the fiducial marker on the left lower lobe. 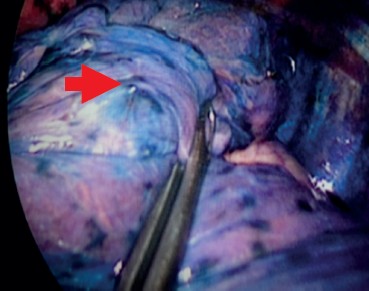 Figure 2B: An image of a lung with fiducial marker placement with dye spillage

Our case involves the detection of solitary pulmonary nodule (SPNs). SPNs often don’t manifest symptoms, it is in its late stage that symptoms are evident, at this stage having a favorable prognosis would be slim. A study done by Baker S6 demonstrated that SPNs are often detected through lung screening, thus annual lung screening for those high risk patients is encouraged to lower the cases of lung cancer. In order for this screening to be possible a low dose CT is utilized and when a nodule is detected, further tests are required. This is where other modalities such as ENB with localization will play its part.

ENB has made its mark as one of the most reliable non-invasive approaches in managing solitary pulmonary nodule before a resection will be considered. Although ENB alone can be used as a stand-alone approach in managing SPNs, combining it with fiducial markers and dye marking will enhance its performance in providing a less invasive, more precise and accurate operating procedures. The first case demonstrated good localization with both fiducial and dye

marker. However, the second case, with dye spillage, proved the importance of combined localization. Using dye alone, localization would have failed and, in fact, decreased the visualization of pulmonary parenchyma and decreased the chance of identifying the lesion properly.

Since the advent of fiducial implants utilization, currently known as fiducial markers, the use of this technique has steadily been gaining recognition for its contribution as a helpful tool to accurately locate solitary pulmonary nodules. It has played a significant role in transforming the different approaches in the localization of solitary lung nodules. Several researches posited the efficacy of fiducial marker as an aid in the localization of solitary pulmonary nodules.7,8

Fiducial marker delivered during an operation proved to be an effective aid to surgeons to precisely locate lung nodules. It therefore led to a surgery with fewer complications, thus leading to a definitive diagnosis and accurate medical treatment.

As a novel approach in creating a safe, accurate and minimally invasive surgical procedure, fiducial markers have proved to be efficient and valuable in establishing a precise localization of lung nodules. The limitation of this research is on its limited participants, and its retrospective approach thus, further study with a larger number of subjects observed in a prospective approach will optimize a more definitive establishment of the efficacy of fiducial markers.

This is a retrospective approach of two cases of lung nodule established through chest CT, with subsequent procedures including ENB, fiducial and dye marker placement and VATS, which have been performed effectively with the aid of localization.