This descriptive study aims to compare the  effectiveness between two methods of pupil dilatation in patients  of the Eye Ear Nose Throat (ENT) Department at the BNH Hospital.

From the comparison at 20, 30 and 45 minutes after the first drop instillation, both methods showed that the difference of pupil size between the time points was statistically significant  (p > 0.001). The comparison between the first and the second  method illustrates that the difference of pupil size at each time point was not statistically significant (p = 0.032,0.800 and 0.102,respectively) at the 99.9% confidence interval level. Thus, the second method should be used because it requires only two times of  instillation (2 times less than the first method) and the pupil measurement at 20 minutes after the first drop instillation reduces waiting times for patients.

The study supports pupil dilatation by using a mixture of 0.75% Tropicamide plus 2.5% phenylephrine and  improves the process by reducing the waiting times of patients.  Patients receive a lower amount of the drug, decreasing from 4 times to 2 times, so the risk of side effects is reduced. 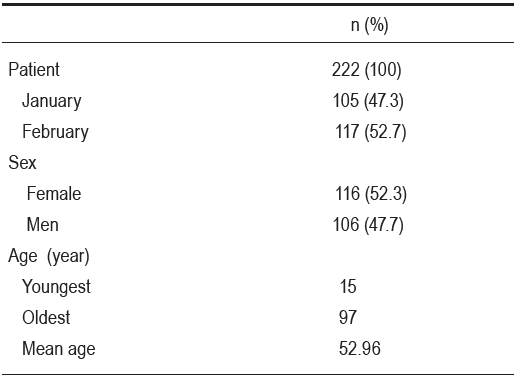 The number and percentage of out-patients in the ENT department at the BNH Hospital from 1 January 2014 to 28 February 2014.
Table 2:

The pupil size of patients receiving mydriatic agents with the 1st and the 2nd method at 20, 30 and 45 minutes.
Table 3:

Comparison of pupil size between the 1st and the 2nd method at 20, 30 and 45 minutes using the Friedman Test.
Table 4: