The treatment outcomes of NPC patients have significantly improved because of the advances in radiotherapy and comprehensive chemotherapy strategies with the 5-year survival rate currently having increased to 80%.5 A study from Hong Kong by Lee et al.6 reported that 52% of patients developed recurrent NPC within 2 years, and 39%, within 2-5 years. Imaging studies are the mainstay non- invasive modality to confirm deep recurrences when the ear, nose, throat (ENT) examinations are not so obvious.

According to several studies,7-10 large tumor volume, skull base or carotid space invasion and persistent thickening of the nasopharynx after treatment beyond 6 months has been reported to be the significant association with NPC recurrence from conventional CT. Some of these findings are not applicable to routine work, for example, volumetric analysis of the tumor. Others, such as skull base invasion or persistent thickening of the nasopharynx are not easy to evaluate in post-treatment cases.

Perfusion computed tomography (CT) is a technique that allows quantitative assessment of various hemodynamic parameters, such as tumor blood flow (BF), blood volume (BV), mean transit time (MTT), and permeability surface area product (PS).11 Rumboldt Z et al.12 demonstrated that the PCT can differentiate between benign and malignant tumors in the head and neck region and there is a report13 that shows the correlation of the microvascular density of head and neck squamous cell carcinoma and locally controlled other (non-NPC) head and neck carcinomas with PCT parameters. The purpose of our study is to demonstrate the usefulness of the PCT in the detection of local recurrent/residual (LR) tumor in patients with NPC after radiotherapy.

This is a prospective study conducted at the Siriraj-imaging center of the department of radiology, faculty of medicine, Siriraj Hospital, Mahidol University, Thailand, between June 2010 and May 2013. The study was approved by the institutional medical Ethics Committee Board (Ethics approval no. Si488/2014). Informed consent was obtained from all patients before recruitment, and 140 patients with NPC were enrolled into our study when the following criteria were met:

After complete follow-up, patients were divided into two groups based on the final diagnosis of LR or non-LR groups. LR group is defined as positive malignancy from the pathological report. The criteria for the non-LR group included (a) negative malignancy from the pathological report or (b) no suspicious foci of tumor recurrence from serial ENT examination or conventional CT follow-up (Table 1). The PCT parameters were analyzed and compared between these two groups.

PCT was consecutively performed with routine contrast- enhanced CT of nasopharynx and neck by using a 64-slide multidetector CT scanner (LightSpeed VCT; GE Medical Systems). The first acquisition (kVp 80, mA 110) was performed as the localizer, scanning from skull base to aortic arch without contrast medium injection. After lesion localization, a 4-cm lesion region was selected by the radiologists for the dynamic study in the maximal diameter of the lesion. Eight slices were selected to cover the lesion as much as possible. The forty phase dynamic study of the selected area was performed with the same acquisition (kVp 80, mA 110) in which the delayed time was taken 5 seconds after contrast medium injection. The total dose of iodinated contrast medium was 50 ml of 370 mg/mL and the injection rate was 5 ml/sec following by 30 ml of normal saline with the same injection rate.

The PCT data were post-processed by a radiology resident in training and an experienced neuroradiologist. All PCT images were analyzed by using commercial deconvolution- based CT perfusion software (Perfusion 4.6; GE Healthcare, Milwaukee, Wisconsin). To generate contrast enhanced scans, the arterial input was selected ipsilateral to the tumor internal carotid artery. Then the data were processed into functional maps that corresponded to blood flow (BF- ml/100gm/minute), blood volume (BV-ml/100gm), and mean transit time (MTT-second), and permeability surface area product (PS-ml/100 gm/minute). Finally, regions of interest (ROI) were placed in the most prominent primary tumor on the cross- sectional slice to obtain PCT measurements. (Figure 1) The ROIs were avoided to place on the cystic or necrotic part of the primary tumor.

To identify the difference between the LR and non-LR groups, the statistics analysis was done with SPSS software (SPSS Inc., Chicago, IL). The chi-square test was used for categorical variables (eg. sex and T-staging) and two-sided t-test for continuous variables (age, duration from the last radiotherapy, BF, BV, MTT and PS). The significant difference was defined as p < 0.05. The sensitivity and specificity for each PCT parameters were analyzed by ROC curve. The inter- observer agreement for each PCT parameter measurement between the resident in training compared to the findings of an experienced neuroradiologist was also analyzed by intraclass correlation coefficient (ICC). ICCs of more than 0.75 were considered to be in high agreement.

A total of 140 post-radiotherapy NPC patients were recruited to our study. Two patients were excluded due to severe motion artifact on the PCT. After having completed two years follow-up, 118 had a final diagnosis of non-LR and 20 patients had LR. In 20 recurrent NPCs, pathologic types were squamous cell carcinoma. Among these two groups, there was no significant difference for the demographic data (age, sex, T-staging and time from latest radiotherapy), see Table 2. 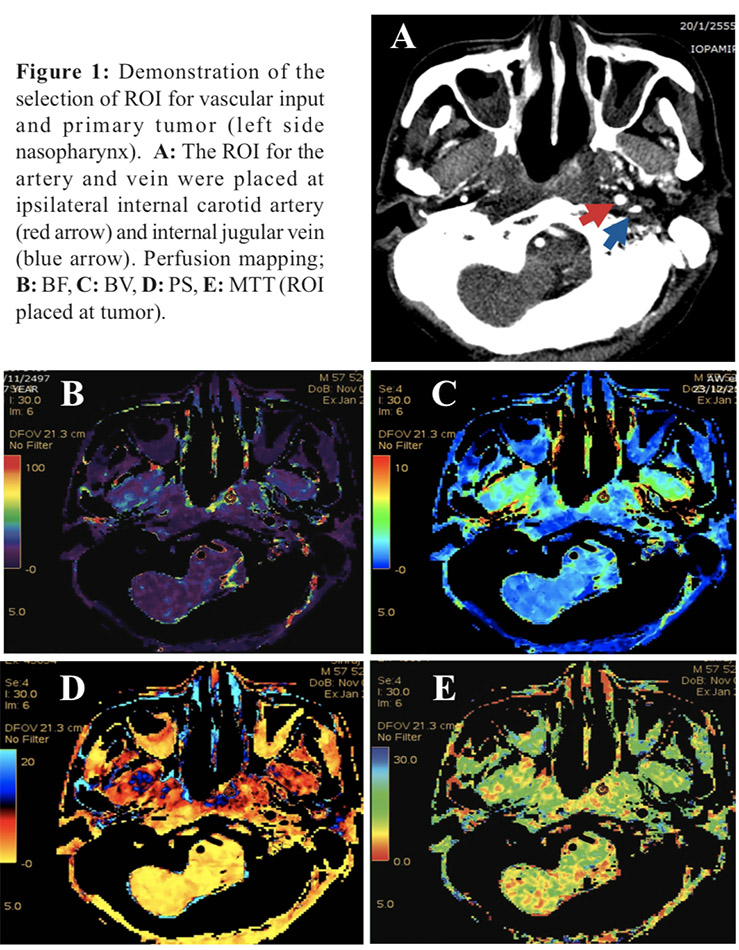 Table 3: Perfusion CT parameters between the LR and non-LR groups 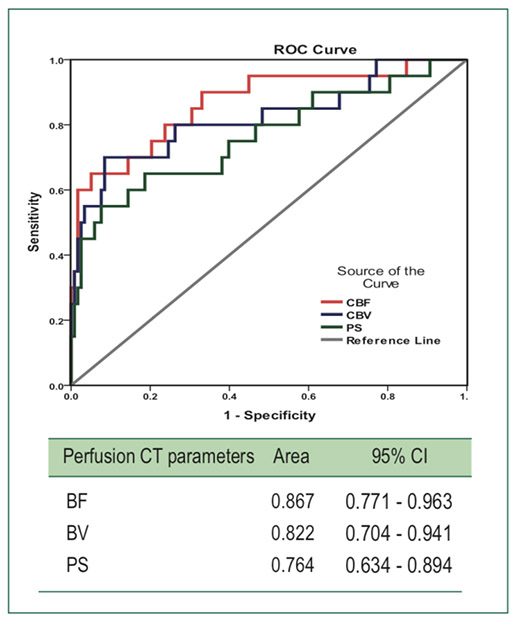 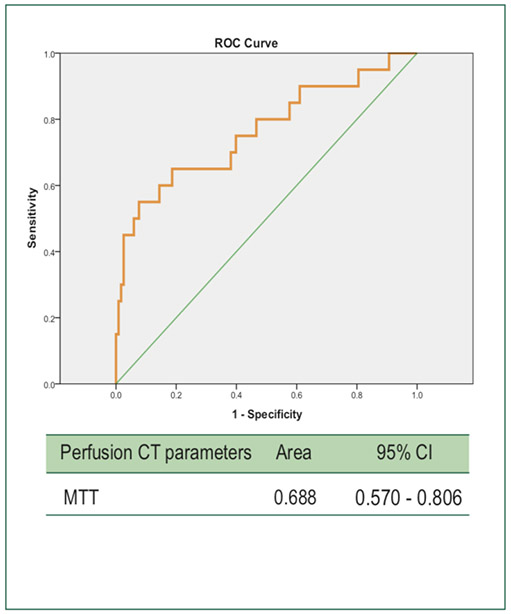 The increased availability of the multidetector CT makes the PCT one of the most interesting methods for detection of recurrent NPC as a supplement to the conventional CT. Several studies11,13,14 suggest that PCT was the functional imaging that allowed mapping of the tumor vascularity in head and neck region. Lorraine et al.,13 also reported the association between the BF and BV with the microvascular density of head and neck squamous cell carcinoma which may imply that the PCT can distinguish between benign and malignant lesions.

Consistent with D. Su et al.,14 the study revealed the PCT parameters were significantly different in locally recurrent and radiation fibrosis in post-treatment NPC patients. Tuntiyatorn et al.,15 suggested that CT perfusion may have a role in predicting treatment response of NPC.

Our result that consisted of more populations and longer time to follow-up demonstrated that the PCT parameters including, BF, BV, MTT and PS were significantly different between the LR and non-LR groups and may help to distinguish between these two entities. Different from Jin G’s16 study, we found a significant MTT change that helps predicting recurrence. In addition, among each of the PCT parameters, we also found that BF and BV trends to be the most reliable parameters because these two parameters demonstrated more statistical significance and specificity than the rest. So in our initial experience, measurement of the PCT parameters made a more confident diagnosis of the recurrent tumors or stable disease when the conventional CT was in doubt. (Figure 4 and Figure 5)

Not only were the PCT parameters useful but also the functional mapping which can adjust color gradient to en- hance the visual assessment making the depiction of local recurrence easier, rather than the conventional CT (Figure 6). Moreover, color mapping will help planning for further radiotherapy.

Figure 4: A 50-year-old woman with left nasopharyngeal carcinoma (T2N2M0) and complete chemoradiotion for 6 months. The conventional CT revealed soft tissue thickening at left nasopharynx and obliterated the Rosenmuller’s fossa with faint contrast enhancement (arrow) which interpreted probably the recurrence (A1 and A2) and the perfusion mapping demonstrated the focal area of high BF (B), BV (C) and PS (D) with relatively high MTT (E) (arrow) and extended to right nasophayrnx (arrow). This allowed for a more confident diagnosis of recurrent disease. The tissue diagnosis also reported recurrent squamous cell carcinoma at both sides of nasopharynx. Figure 5: A 56-year-old man with right nasopharyngeal carcinoma (T4N2M0) and complete chemoradiotion for 13 months. The conventional CT demonstrated marked soft tissue thickening at right nasopharynx (arrow) which suggested the recurrence (A1 and A2), while the perfusion mapping demonstrated low BF (B), BV(C) and PS (D), relatively high MTT(E) in the corresponding area (arrow), that meant that it was more likely to be non-recurrence or post-treatment change. The tissue diagnosis confirmed that it was negative for malignancy. Figure 6: A 78-year-old man with left nasopharyngeal carcinoma (T2N0M0) and complete chemoradiation for 3 months. The conventional CT revealed a small soft tissue mass at left posterior (arrow) which suggested the residual tumor (A) and the perfusion mapping easily depicted the residual tumor due to difference of color gradient (high BF (B), BV (C) and PS (D) with rather low MTT (E) in the corresponding area). The tissue diagnosis also reported squamous cell

Reliability and reproducibility of PCT was also evident by high inter-observer agreement. The assumption of relatively lesser interclass correlation coefficient of MTT may be due to error of color perception, yellow-blue. The relatively small scanning coverage of the PCT during the dynamic phase sometimes caused the problem in the case of the large tumor volume or tumor extension. We recommended that the scanning coverage during the dynamic phase should cover skull base and carotid space. According to the study of Umasan and Anchalee et al.,7 it was reported that the significant risks of local recurrences of NPC were tumors involving these two spaces. A chance to evaluate the nodal extension or recurrence by PCT was precluded for the same reason.

Compared with the same functional imaging such as FDG-PET/CT, the study of Chia-Hung et al.,19 revealed 100%, 96%, and 97% for sensitivity, specificity, and accuracy, respectively, for detection of recurrent or persistent nasopha- ryngeal carcinomas20. Here the PCT was no less capable than the FDG PET/CT but the higher availability of MDCT machines and less complexity in patient preparation and image acquisition made PCT a good option.

Concerning radiation exposure, patients who underwent PCT protocol, received more radiation doses (about 2.4 mSv per time) when compared to routine head and neck CT.21,22 This may be acceptable for post-radiation therapy patients who received the high dose of radiation about 70 Gy. However, we did not recommend an additional PCT every time that patients were sent for follow up. A supplementary PCT may be beneficial in cases where the recurrent disease was in doubt from the results provided by conventional CT or by adding to the first time after radiotherapy to provide baseline images.

The useful parameters of BF, BV, MTT and PS were accepted as the parameters related to the tumor vascularity and associated with microvascular density in squamous cell carcinoma. This research triumph to raising the efficacy of CTP in clinical practice (post treatment follow-up) and precision in CTP protocol for the diagnosis tips. The experience of CTP measurement was the important to make more confident in the diagnosis of the recurrent tumors. The combination of the patient examination and history is important to concern in the interpretation. Precision schedule for a CTP examination period after chemo-radiotherapy is not recommended because the clinical judgment is enrolled for the best practice. But, adding CTP is beneficial to provide precise data for the clinical best practice.